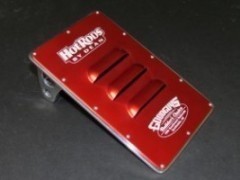 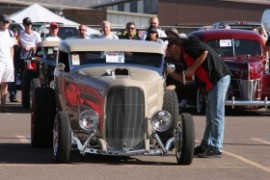 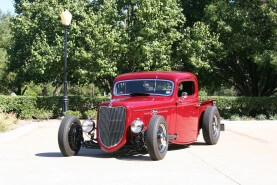 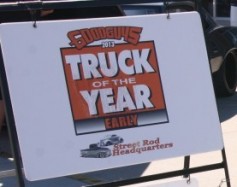 Lee took his 1935 Ford P/U to Texas motor speed way in Fort Worth Texas and found himself being pick as one of the Truck Of The Year Early Finalist. Several trucks were picked through out the year and it was an honer to have bin picked. 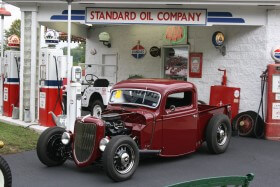 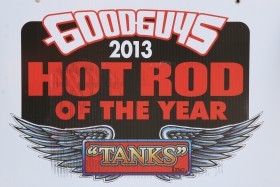 The crew of Hot Rods By Dean came from sunny Arizona with a 1935 Ford pickup they built for Lee Schmidt. They are known for building them right and the pickup did not disappoint. The fenderless truck nails the proper blend of stance and proportion and is packed with one-off details including a repetitive series of circles found on the frame rails and the sides of the seat. The body was treated to a modest three-inch chop. It's channeled five inches over the chassis and the grille shell was sectioned to match, now flanked by Guide headlights. The bed was made from scratch and has dual storage bins in the floor behind the cab and a one-off latching system with upholstered tailgate chains. All the panels were sprayed in a custom-mixed PPG shade of maroon. Gloss black was used for contract on the chassis and 16" artillery wheels. Under the channeled body is a custom-made chassis with a dropped SuperBell axle on split wishbones and 9" Ford on a four-bar/coilover combination. Hot Rods By Dean fabricated a nice set of outside headers and the small block is fed with an Edelbrock intake and a Quickfuel carb and connects to a 700R4. Glen Kramer brought the interior to the next level with outstanding black pleated leather-work with red stitching. Dennis Crook customized a vintage Plymouth steering wheel to top a custom column shifted crafted by Dean's that combines a 1935 shifter and a cable mechanism. A tow-tone 1940 Ford dash from Dean's stash pile was neatly installed and fitted with Classic Instruments gauges in a custom dash bezel. A Hot Rods By Dean stash box hides all the controls under the stock speaker grill. 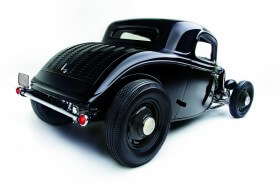 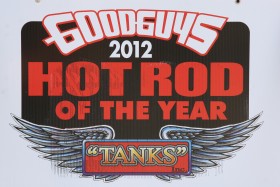 Tim Kirby's '33 Ford was a three-year build of his vision that was brought to life by Hot Rods By Dean. The body has been chopped and channeled and painted in PPG single stage black pain. A pair of 1935 Nash headlights were used, and 158 louvers were punched into the deck lid. The chassis uses a Super Bell dropped axle and a V8 quickchange rear, split '36 wishbones, Ford F1 steering, and '39 Lincoln brakes on all four corners. The cool wheels are rare 18" Kelsey Hayes mild truck items, shod in 4.50 and 7.00 Excelsior tires. An Olds 303 was selected, now fed by Three Strombergs underneath custom air cleaners fashioned from '50s Cadillac air vents. Hot Rods By Dean fabbed up the headers and exhaust, and bolted a Tremec 5 speed to the back of the block. The dash is a '33 modified with a '35 waterfall center and an inverted '35 dash top on the bottom for a unique look. A Steward Warner "Navigator" boat panel was used with '60s era SW gauges. Also marine-based is the stylish Sheller boat steering wheel that features a Hot Rods By Dean horn assembly. Glen Kramer Upholstery expertly stitched the leather seat and panels. 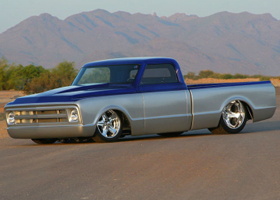 Hot Rods By Dean brought out this '67 GMC pickup to compete in the Radical Pickup class only to find them-selves in the running for the Ridler Award by making the Great 8 presented by Pirelli. To say this pickup has numerous body mods would be an understatement but the most noteable are the 4 1/2 inch top chop and the suicide opening doors.

Super Nationals Builder of the year - 2009 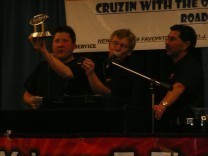 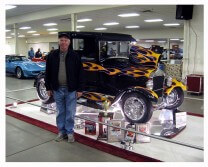 Dean Livermore was chosen as the builder of the year in 2009 for the Super Nationals in New Mexico. One lucky winner was awarded Deans best of show. 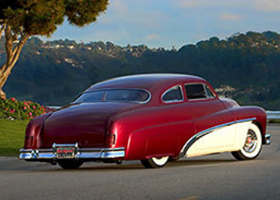 Hot Rods By Dean took a 1951 Ford Mercury that they built for Tom to Sacramento Autorama for the 57th annual running of the Word's Most Beautiful Custom, the weekend of February 9-11 2007. Among the 15 participants were Lucky 7 Customs, Oz Customs and Rick Dore Customs, just to name a few. We were honored to take home the Award's, being that it was our first custom and to beat out some of the top custom car builders in the country was a wonderful surprise. 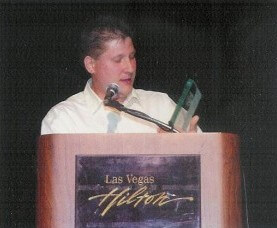 Dean Livermore, founder and proprietor of Phoenix, Arizona based " Hot Rods by Dean" was presented with the goodguys 2005 Trendsetter award, Wednesday, November 2nd. Livermore accepted the award during the Hot Rod Industry Alliance reception at the SEMA show. The Goodguys Trendsetter Award is annually presented at SEMA to rising young talents in the realm of rod & custom car building. A graduate of Universal Technical Institute and a life long car nut, Livermore opened Hot Rods by Dean in 2001 after several years of working at Rod Palmers Arizona Street Rods and other southwest rod shops honing his skills. Hot Rods by Dean was founded on a passion for building quality, traditional rods and customs. After he finished a recreation of Dick Magoo's famous red '29 Ford roadster on deuce rails for STREET RODDER magazine editor Brian Brennan, Primedia Inc. commissioned Hot Rods by Dean to complete the final assembly of the 2005 STREET RODDER Magazine Road Tour '36 Ford coupe. In addition to building a myriad of trend setting rods, customs, trucks and street machines, Hot Rods by Dean also manufacturer's products the every day hot rodder can appreciate like bearing and bushing hits, exhaust hangers, battery trays and machined dash bezels.